The Latest from Hilliard Management

Over the past few years we have received an increasing number of requests for skeet ranges. Given that all of us at HELM are enthusiastic outdoorsmen this is a trend we’re excited about. One of the great things about shooting clays is its wide appeal. Young, old, male, female, novice, expert, you name it… we have yet to meet anyone who told us they absolutely hated shooting skeet or trap and never wanted to do it again.

If you’re not an experienced shooter it may be helpful to understand some of the terminology, which is often used interchangeably. Skeet shooting is commonly used as a catch-all phrase, but actually refers to a specific format. We’re not purists here at HELM, but since a shooting range can be a major investment it’s helpful to identify exactly what you’re looking. Trap, skeet, five stand, and sporting clays are the most commonly found standardized formats found at gun clubs.

A single machine with five stations behind it. Shooters rotate between the stands taking five shots per station.

Consists of two machine, one each in a high house and a low house, with eight shooting stations. Shooters rotate through the stations taking a variety of single and double shots depending on the stations.

Consists of five shooting stations with assortment of traps that are meant to simulate different birds in the wild. Shooters rotate through the stations and take two double shots and one single shot per station.

Sometimes called “golf with a shotgun”. A sporting clay course is typically made up of at least eight stations (with two machines per station), which are connected by walking paths. Each station has different shots, and shots may be through the woods, in open fields, or over water. Of the various formats this requires the most equipment and work to set up, but is undoubtedly the most fun.

Now for the inevitable question… “If I wanted to start with a single machine, what should it be?” The good news is there is a simple answer – a wobble trap. This is hands down the most versatile machine out there. It’s similar to a regular trap, but the wobble means it oscillates not just side-to-side, but also up-and-down.

Wobble traps are a blast on their own, and can easily be absorbed into a large course. It’s not uncommon for a client to buy a wobble trap and call us back months – sometimes weeks – later and tell us they want to order another machine or build a full course. The great thing about shooting ranges is there really are no set rules unless you want there to be. Established formats exist because of their wide appeal and popularity, but what’s to say you can’t create something new. After all, provided that you’re able to safely configure a course, it’s your farm, your machines, and your shooting range. Have fun with it and get creative.

Below is a wobble trap we recently installed along with a custom built trap house. 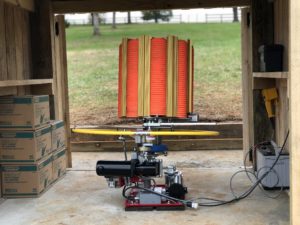 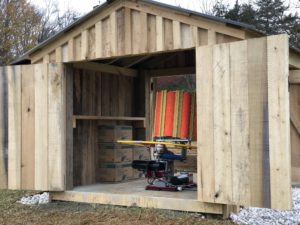 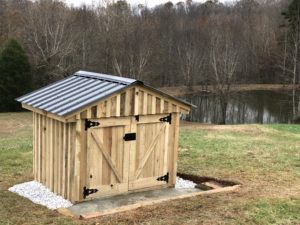